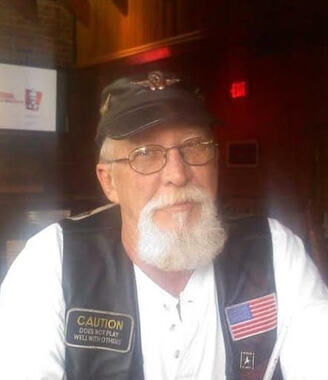 William "Bill" "Spider" Crouch, 70, of Somerset, passed away on Saturday, January 11, 2020 at the U.K. Medical Center, Lexington, KY.
He was born in Pulaski County on March 6, 1949; son of Ruey (Smith) Crouch of Bobtown and the late George Irvine Crouch. He worked as a mechanic and was a U.S. Army Veteran.
He is survived by his mother; his wife, Linda Ann (Bailey) Crouch, whom he married November 16, 1970; two daughters, Tonya L. (Crouch) & (Dr. Jim) Piephoff of Alton, Illinois and Moneika Crouch of Somerset; three brothers, David & (Betty) Crouch of Woodstock, Donald & (Susan) Crouch of Somerset, and Jeff & (Sherry) Crouch of Somerset; a sister, Arlena Molen of Somerset; one grandchild, Taylor Jade & (Michael) Pickerell; two great-grandchildren, William Maddix & Graylyn James Pickerell; and several nieces, nephews, & cousins.
He was preceded in death by his father.
A Funeral Service will be held 1:00 PM Friday, January 17, 2020 at the Chapel of Morris & Hislope Funeral Home with Bro. Perry Dobbs officiating.
Burial will be in Mill Springs National Cemetery.
Military Honors will be conducted by American Legion Post # 38.
Vistiation will be after 6:00 PM Thursday, January 16, 2020 at Morris & Hislope Funeral Home.
Condolences may be expressed to the family at www.morrisandhislope.com
Published on January 13, 2020
To send flowers to the family of William Crouch, please visit Tribute Store.

Send flowers
in memory of William

A place to share condolences and memories.
The guestbook expires on April 12, 2020.

So sorry for the loss of this veteran. Prayers for the family.

Chop
Sincere condolences to the family and friends
Ole Spider will be missed by all who knew him ...
GBNF
Charles Gibson

Until we ride again brother

Jim & Wanda Cantrell
Spider was one of the best...he will be greatly missed.
Brenda L. Girdler Taylor

Linda and family, I'm so,so sorry to hear this about Bill. Cousin or not he was one of my favorite people. Never ever seen him that he couldn't bring a smile to my face or my heart. You will be miss greatly my old friend.