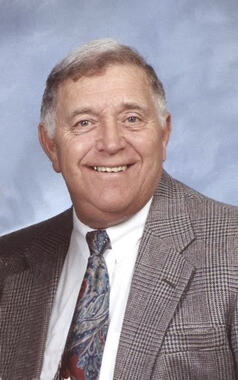 Back to Willard's story

Willard Warren Dysinger, age 84, departed this life on Tuesday, January 21, 2020 at Hospice of Lake Cumberland Jean Waddle Care Center.
Willard was born on March 13, 1935 in Detroit, MI to the late Herbert Everett Dysinger and Vera May Currie Dysinger. Willard worked as a Press Operator for the Ford Motor Company for 37 years before retiring in 1991. After retiring, he moved to Somerset. He was a Veteran in the United States Army from 1957-1959 and was stationed in Germany. Willard was a member of First Baptist Church and was a former Deacon and Sunday School Teacher. He loved his family, kids, grandkids, great-grandkids, and his church family. He also loved his gang at Alton Blakely when he worked picking up cars for them.
He is survived by his wife, Virginia "Ginny" Gail Woods Dysinger, whom he married on March 7, 1958 in Detroit, MI; four children, Kimberly Dawn Dysinger of Oriental, NC; Jill Irene (and Gerry) Jenkins of Fowlerville, MI; Linda Kay LeBlanc of Knoxville, TN; ; and Kenneth Douglas II (and Monna) Dysinger of Somerset, KY; seven grandchildren, Jesse Currie of San Diego, CA; Chelsea LeBlanc of Knoxville, TN; Lance LeBlanc of Knoxville, TN; Megan (and David) Adkins of Calgary, Alberta; Caleb (and Kaila) Jenkins of Fowlerville, MI; Hallie Dysinger of Somerset, KY; and Cole Dysinger of Somerset, KY; two great-grandchildren, Keilah and Esther Adkins; one sister, Deanna (and Gary) Call of Canton, MI; and many nieces and nephews whom he was very close to.
Along with his parents, Herbert and Vera Dysinger, he was preceded in death by one brother, Kenneth Douglas Dysinger and three sisters, Jean McPherson, Irene Walsh, and Leone Thomas.
Visitation will be held on Friday, January 24, 2020 from 5:00pm until 8:00pm at First Baptist Church in Somerset.
A second visitation will be held on Saturday, January 25, 2020 from 10:00am until 11:00am at First Baptist Church.
His funeral service will follow at 11:00am at First Baptist Church with Dr. French Harmon officiating.
The burial will be on Monday, January 27, 2020 at 11:00am at Mill Springs National Cemetery. Military Honors will be conducted by the American Legion Post# 38 Honor Guard.
The family requests that expressions of sympathy be made to the OVI Children's Hospital in Memory of Willard Dysinger. Donations may be made online at https://www.ovinternational.org/donate or you may mail them to OVI Children's Hospital C/O Lake Cumberland Funeral Home P.O. Box 1441 Somerset, KY 42502.
You are welcome to view the obituary and send condolences to the family at our website: www.LakeCumberlandFuneralService.com.
Lake Cumberland Funeral Home is entrusted with the arrangements for Willard Dysinger.
Published on January 23, 2020
To plant a tree in memory of Willard Dysinger, please visit Tribute Store.

Plant a tree in memory
of Willard