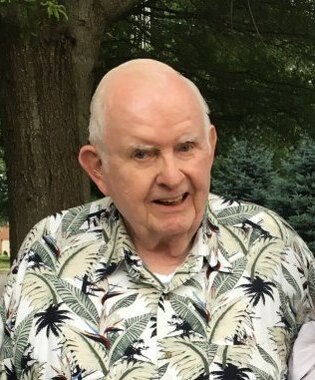 Back to Robert's story

Robert Kemp "Bob" Johnston, 91, husband of Ernestine "Tina" Thompson Johnston, died Jan. 27, 2020 at the University of Kentucky Hospital in Lexington, KY. He was born July 27, 1928 in Indianapolis, IN to the late Dr. Ora Kemp Johnston and Mable Mae Marsh Johnston. Mr. Johnston was stationed in Berlin Germany from 1946-1948 in the U.S. Army Constabulary as part of the occupation and security force after World War II. Mr. Johnston graduated from Indiana University with a Real Estate Major, attended School of Mortgage Banking at Northwestern University, and Ohio State University. He was employed as a mortgage banker and lender most of working life, including First Security Bank in Lexington, KY, Ohio Financial Service Corporation in Columbus, OH and Midwest Bank in Jackson, MI. He was a member of the Lexington Lodge #1 F.&A.M., Scottish Rite Valley of Lexington and Oleika Shrine Temple. He was also a past member of the Optimists Club of Lexington, the Lexington Chamber of Commerce, the Lexington Real Estate Board, and the Lexington Home Builder's Association. Survivors other than his wife include two sons, Gerald Kemp (Ying) Johnston and Thomas Ray (Whitney) Johnston; four grandchildren, Andrew Johnston (fiancée Kristin Andres), MI, Alexander Johnston, TN, Neely Johnston and Kasen Johnston, both of Lexington, KY; stepdaughter, Benita (Donnie) Hatter, Nicholasville, KY; stepson, David (Delores) Thompson, Burnside, KY; sister-in-law, Marjorie Johnston, of Pawleys Island, SC; and dear friends, Jim and Pat Bess, and Deloris Turner and her late husband James Turner. In addition to his parents, he was preceded in death by two wives, Maxine Neely Johnston, the mother of his two sons, and Betty Wise Johnston; and three brothers, William A. Johnston, James M. Johnston, and Paul Richard Johnston. Funeral services will be 12:30 pm Fri., Jan. 31, at Kerr Brothers Funeral Home, 3421 Harrodsburg Rd., Lexington, KY. Burial will follow in Lexington Cemetery. Visitation will be 5-8 pm Thurs. at the funeral home.
Published on January 28, 2020
To send flowers to the family of Robert Johnston, please visit Tribute Store.

Send flowers
in memory of Robert

A place to share condolences and memories.
The guestbook expires on April 27, 2020.