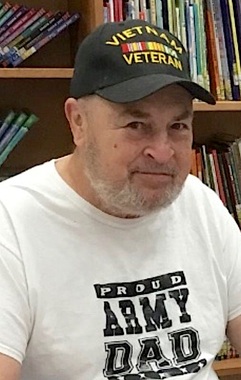 Back to James's story

James Robert "Bob" Broadfoot, age 71, of Pine Knot, Kentucky, passed away on Friday, February 7, 2020, at the home of his children, surrounded by his loved ones.
Bob was born on April 7, 1948, in Memphis, Tennessee, son of James Robert, Sr. and Dena Aurelia Arnett Broadfoot. He was a 1966 graduate of Greeneville High School in Greeneville, Tennessee. Bob served his country in the Vietnam Conflict, where he achieved the rank of Sergeant E-5 and was decorated with 18 medals for valor, including: Five Purple Hearts, Two Silver Stars and Three Bronze Stars. He was nominated twice for the Medal of Honor. Bob was presented the Vietnamese Cross of Gallantry, which is the equivalent of the United States Medal of Honor, by a South Vietnamese Army General.
Upon his return to the states, Bob attended and graduated in 1973 with a double major in Psychology and in Environmental Health from East Tennessee State University, in Johnson City, Tennessee. His work career was spent in the administration level of different mental healthcare residential facilities, including the Greene Valley Developmental Center, Greeneville, Tennessee, The Communities at Oakwood, of Somerset, Kentucky and Laurel Bay Healthcare, in Williston, South Carolina.
Bob loved his Native American heritage. He had the ability to read Latin. Bob was an avid NASCAR fan; a season pass holder for many years at the Bristol Motor Speedway. He loved to go fishing and loved to paint. Bob was a member of the East Apple Tree United Baptist Church, of Revelo, where he taught Sunday School.
He is survived by his children, Erin (and Josh) Campbell, of Mt. Pleasant, South Carolina, Brian Ricker, of Louisville, Kentucky, Jonah Randall Broadfoot, Obadiah Blue Broadfoot, Hannah Bren Broadfoot and Bristol Grace Broadfoot, all of Pine Knot; his sisters, Christi Broadfoot Blevins, of Greeneville, Tennessee, and Dena "Debby" Broadfoot Roberts, of Oak Ridge, Tennessee; his grandchildren, Kyle Campbell and Reece Campbell; the young men he raised as his own, Graham Davidson, Josh Gillespie, Rusty Mays, Jonathan McHan and Jake McCamis; a friend and mother of his children, Jana, and husband-in-law, Ricky Ball, of Pine Knot; a nephew, Shawn Berquist; and three nieces, Karla Snyder, Jade Moore and Ashton Woods.
Bob is preceded in death by his parents.
A Celebration of the Life of Bob Broadfoot will be held Saturday, February 15, 2020 at 1:00 p.m., at the East Apple Tree United Baptist Church, in Revelo, with Bro. Johnny Wayne Inman officiating.
Another Celebration of Life service will be held at Mt. Zion United Methodist Church, in Afton, Tennessee, Sunday, February 16, 2020, at 3:00 p.m.
Inurnment will be held on February 17, 2020, at 11:30 a.m. in the Wright Cemetery, in Parkers Lake, Kentucky. Military Honors will be conducted by the McCreary Central High School JROTC Honors Unit.
You may view the obituary, sign the online register book and send condolences to the family at www.somersetundertaking.com.
Somerset Undertaking Company and Crematory is in charge of arrangements.
Published on February 11, 2020
To send flowers to the family of James Robert Broadfoot, please visit Tribute Store.

Send flowers
in memory of James

A place to share condolences and memories.
The guestbook expires on May 11, 2020.