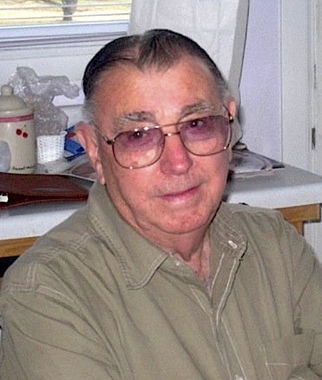 Back to Dewey's story

Dewey Logan Bray, age 88, of Ferguson, KY, passed away on Sunday, February 9, 2020 at Lake Cumberland Regional Hospital.
Dewey was born on March 22, 1931 in Somerset, KY to the late Raymond and Matilda Meece Bray. He was a member of Ferguson Baptist Church and veteran of the United States Army. Dewey enjoyed woodworking and watching UK basketball. He especially loved spending time with his grandchildren and watching them participate in numerous activities.
Dewey is survived by one son, Rondal (and Wilmouth) Bray of Somerset; one daughter, Melissa (and Ritchie) Spaw of Somerset; three brothers, Lowell Bray of Kingsport, TN, Rothel Bray of OH and Norman (and Carol) Bray of OH; three grandchildren, Chase Spaw, Braydyn Spaw and Lofton Spaw; and a host of nieces and nephews.
Along with his parents, he was preceded in death by his wife, Lola Fern Pence Bray, whom he married on July 20, 1957 at East Somerset Baptist Church, and she preceded him on February 22, 2011; three brothers, Glen (and Ethel) Bray, Coy "Tiny" Bray and Ervil Bray; one sister, Clyda Jean (and Howard) Jewell; and one sister-in-law, Norma Bray.
Visitation will be on Wednesday, February 12, 2020 from 6:00pm until 9:00pm at Lake Cumberland Funeral Home.
His funeral service will be held on Thursday, February 13, 2020 at 11:00am at the Chapel of Lake Cumberland Funeral Home with Bro. Darrell Vance
officiating. Burial will be at Clay Hill Cemetery. Military Honors will be conducted by the American Legion Post #38 Honor Guard.
You are welcome to view the obituary and send condolences to the family at our website: www.LakeCumberlandFuneralService.com
Lake Cumberland Funeral Home is entrusted with the arrangements for Dewey Bray.
Published on February 10, 2020
To send flowers to the family of Dewey Bray, please visit Tribute Store.

Send flowers
in memory of Dewey

My thoughts and prayers are with the family at this time.
Dewey was a very good person and loved talking to him.
He will be missed by many.